How prepared was your dealership for 2017’s roller-coaster ride of new and used car sales?

If you are like many dealerships, you weren’t prepared for the unusual hurricane-induced car buying demand spike in the Fall that usually happens after tax refund time in the Spring. 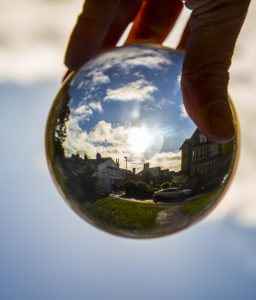 It’s a dealership’s worst nightmare to be caught during a spike in sales demand at a time of low inventory, and then be forced to sit back and watch as potential customers head over to your competition.

Then, as you scramble to purchase inventory and get it frontline ready, you can almost watch the revenue slip past your balance sheet. Will you get the cars cycled out before the demand is gone?

Oh, to have a reliable crystal ball during auction time!

Actually, if you know where to look, there already is one. Auto Industry forecasters are expecting lower price volatility than 2017’s record highs and unusual fall spike. These same prognosticators also predict higher volumes of used vehicle sales in 2018.

The crystal balls reveal that a more desirable mix of late-model vehicles entering the marketplace and higher take-home pay as the new federal tax law is implemented, will heat up the used car market, so you might want to prepare yourselves now and reap the rewards when the buyers start coming.

At a recent conference call with investment analysts and reporters, Cox stated that they estimate 85% of US households will see an income increase as a result of the new tax laws. Cox also anticipates a 2 to 4 percent decline in 2018 U.S. new light-vehicle sales to fewer than 17 million units.

By now, all the Harvey and Irma hurricane victims have replaced their cars, so that spike in new and used car sales as replacement vehicles ended in December of 2017.

Still, experts believe that the U.S. economy will continue its strong demand for new and used vehicles in 2018 due to a low unemployment rate, strong financial markets and consumer confidence, and incentive offers from automakers.

Where will the used inventory come from?

It has been predicted that 2018 will be a slowdown in the increasing numbers of late-model vehicles entering the used market, with 2018 lease returns growing only 8.1 percent to 292,000 units.

And most of the growth is in pickups and SUVs, which are more in demand, so grounding dealers will retain more off-lease vehicles themselves.

Expect to see lower rental car-fleet vehicle returns, fewer coupes and hatchbacks, will fall this year, But there will be an increase in pickups, SUV’s and crossovers.

How to stay ahead of the demand.

Following the economic downturn started in 2008, car buyers’ desires for new vehicles leaned heavier towards cars than trucks. This caused a mismatch in the used market as consumers started leaning back towards trucks and SUV’s during the upswing.  But in 2018, half of off-lease vehicles are expected to be light trucks.

Retailers who sell late-model SUVs and crossovers will benefit from declining used-vehicle prices this year, that could squeeze dealerships’ volumes and margins on new light trucks

Now is the time to focus on the operations and look for ways to eliminate bottlenecks and unnecessary snarls.

The focus on fast and efficient reconditioning becomes even more important to maintaining margins on new car inventories as used car demand puts pressure on new car pricing. A small investment in a recon software such as ReconMonitor can mean the difference between profit and loss during a squeeze like the one being predicted now.

As a used car dealer, the decision to pursue CPO designation for select vehicles can be advantageous, making initial inspections even more crucial. Again, any investment in automation can pay for itself. When used car demand is high, each day lost in the recon stage is money wasted. Consider streamlining the intake phase with an investment in inspection software such as InspectionNotes from Automobile Technologies. Why waste time entering and transcribing vehicle details and management of recon needs on paper, when a single mobile recon app can eliminate hours of work?

2018 may not be as bumpy a ride as last year, but it’s sure to have surprises of its own. Staying attentive to the market is as close as we’ll get to that crystal ball, and maintaining an efficient operation will keep your dealership rolling smoothly.